Abuse victim: "I feel as if I have been touched by the devil

A Catholic diocese in County Cork failed to report all complaints of abuse to police, a report has said.

The Commission of Investigation into the Diocese of Cloyne investigated how allegations against 19 priests were dealt with between 1996 and 2009.

Its report, published on Wednesday, found Bishop John Magee falsely told the Irish government he was reporting all abuse allegations to authorities.

The Catholic Church and Bishop Magee have apologised.

The leader of Ireland's Catholics, Cardinal Sean Brady, said it was another "dark day in the history of the response of church leaders to the cry of children abused by church personnel".

"The findings of this report confirm that grave errors of judgement were made and serious failures of leadership occurred," he said.

"This is deplorable and totally unacceptable."

In a statement, Bishop Magee said he apologised to those affected for his "failure to ensure that they were fully supported and responded to in their time of need".

In one case described in the report, the diocese's second-in-command, Monsignor Denis O'Callaghan, was said to have withheld the identity of a perpetrator from the authorities and attempted to have an Irish police officer investigate the case.

The police officer was found to have correctly disregarded the request.

Monsignor O'Callaghan said he was sorry that in responding to allegations of abuse he had sometimes become "emotionally and pastorally drawn to the plight of the accused priest".

He said this was "to the detriment of the pastoral response I intended to make to complainants".

Bishop Magee was one of the 19 priests identified by the commission.

The Cloyne report, which runs to 400 pages, said there were concerns about Bishop Magee's interaction with a 17-year-old boy.

"The commission regrets that it has not been possible to report the case involving concerns about Bishop Magee without identifying him," the report said.

"Concerns were expressed about his interaction with a 17-year-old boy."

It said the teenager, who had been contemplating joining the priesthood, was concerned that "the behaviour of the bishop towards him, which had not perturbed him at the time, was, on reflection, disquieting".

However, the report said it was satisfied that this case had been dealt with appropriately.

The Newry-born Bishop Magee stepped aside in 2009 after an earlier report criticised his handling of abuse allegations.

The latest report, which was published by Justice Minister Alan Shatter and Children's Minister Frances Fitzgerald, said the response of the diocese to allegations of child sexual abuse for the period of 1996 to 2008 was "inadequate and inappropriate".

It said it was a "remarkable fact" that Bishop Magee had taken "little or no active interest" in the management of clerical sexual abuse cases until 2008. This was 12 years after the procedures on how to deal with such matters were implemented by the church.

It added that Bishop Magee had to "a certain extent, detached himself from the day to day management of child sexual abuse cases".

"Bishop Magee was head of the diocese and cannot avoid his responsibility by blaming subordinates whom he wholly failed to supervise," the report said.

In his statement, Bishop Magee said he now realised he should have taken "a much firmer role" in ensuring the implementation of the church procedures published in 1996.

"I accept in its entirety the commission's view that the primary responsibility for the failure to fully implement the church procedures in the diocese lay with me," he added.

The commission said it was aware of some 40 people who may have been affected by clerical abuse in the diocese.

All but two complaints came from people who were adults at the time the complaint was made.

The report said between 1995 and 2005 there were 15 complaints against clergy in the diocese which should have been reported.

The most serious lapse was the failure to report two cases in which the alleged victims were minors at the time the complaint was made.

It also said there was no communication with a neighbouring diocese when a priest who had retired because of complaints went to live there.

However, there was no case in which the diocese moved priests against whom allegations had been made.

A number of priests whom allegations were made against were "retired".

The Irish justice minister said on Wednesday that he intended to introduce a new criminal offence with up to five years in prison for anyone who does not declare information about the abuse of a child.

He said in future, priests would not be excused for withholding information about alleged child abuse even if it was given to them during confession.

The inquiry was set up by the Irish government in January 2009 following a report published the previous month.

It was conducted by the National Board for Safeguarding Children (NBSC) - a body set up by the Catholic Church to oversee child protection policies.

It found child protection practices in the diocese were "inadequate and in some respects dangerous".

"Clearly, an immediate priority today must be the abused victims, ensuring that they receive all necessary support and reassurance in the wake of the publication of this distressing and damning report.

"It is a matter of grave concern that the report's findings show that, up to 2008, the Cloyne Diocese failed in large measure to comply with the Catholic Church's own 1996 guidelines on clerical child sex abuse.

"Had these guidelines been fully honoured and rigorously adhered to (as the public had been led to believe they would), this report would never have been necessary and children need not have been rendered so vulnerable.

"The leadership of the Catholic Church needs to urgently reflect on how, by coherent and effective action, it can restore public trust and confidence in its stated objective of putting children first." 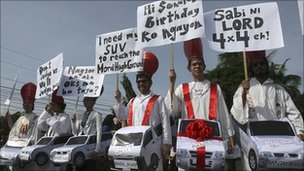