Senior Catholics across Europe use Easter addresses to apologise and acknowledge the damage caused by the scandal, while pontiff remains unrepentant 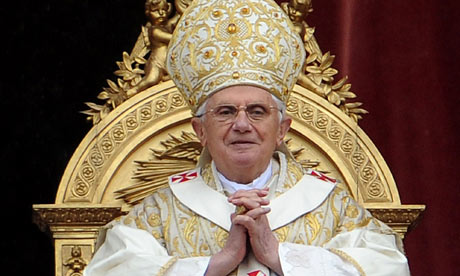 Senior Catholics across Europe today apologised for the way the church had dealt with paedophile priests and acknowledged the damage the scandal had caused to its moral authority.

In Easter sermons that revealed penitence, shame and shortcomings, archbishops in Armagh, Dublin, Edinburgh, Vienna and Westminster asked congregations for their forgiveness and urged them not to abandon the church because of past sins.

But there was no apology from Rome, as Benedict XVI maintained a steadfast silence about the crisis in his annual Urbi et Orbi – To the City and the World – address.

The only mention of the turmoil came from Cardinal Angelo Sodano, the dean of the College of Cardinals, who stood before the pope in a packed St Peter's Square and lauded him as the "unfailing rock" of the Catholic church.

In a departure from protocol, he told the pontiff in a special tribute: "We are deeply grateful for your strength of spirit and the apostolic courage with which you proclaim Christ's gospel."

In an apparent reference to the crisis, and employing a term already used by the pope, Sodano said the church would not be intimidated by "idle chatter".

His appearance was a gesture of defiance and indignation in the face of continued criticism aimed at the Vatican over its response to waves of allegations. The Catholic hierarchy has insisted that the pope is beyond reproach and that the media are conducting a smear campaign against him by exaggerating the scale of the abuse and attempts to conceal it.

However, today saw an unprecedented outpouring of apologies by leading church members across Europe.

Cardinal Sean Brady, the primate of Ireland, admitted that the church failed to involve civil authorities to protect its reputation. Brady, who is under pressure to resign because of his role in making two sex abuse victims sign an oath of silence, said: "I realise that, however unintentionally, however unknowingly, I too allowed myself to be influenced by that culture in our church, and our society.

"I pledge to you that, from now on, my overriding concern will always be the safety and protection of everyone in the church – but especially children and all those who are vulnerable."

In his Easter homily the archbishop of Westminster, the Most Rev Vincent Nicholls, told the faithful that the "serious sins" committed within the Catholic community had been much talked about. He added: "For our part, we have been reflecting on them deeply, acknowledging our guilt and our need for forgiveness."

In Austria, Cardinal Christoph Schönborn apologised for the abuse at an emotional pre-Easter mass. "For some of us, the Church's immaculate appearance was more important than anything else," Schönborn said. "We confess our guilt to the many whom we have wronged as the church, and whom some of us have wronged very directly."

Their penitence came hours after a contrite archbishop of Canterbury rang the archbishop of Dublin, Diarmuid Martin, to try to defuse widespread anger and disbelief after he said the church in Ireland had lost "all credibility".

Rowan Williams made the comments in a BBC interview, explaining that an Irish friend had said it was "quite difficult in some parts of Ireland" to walk down the street wearing a dog collar. Williams remarked that an institution "so deeply bound into the life of a society, suddenly becoming, suddenly losing all credibility – that's not just a problem for the Church, it is a problem for everybody in Ireland."

The backlash was almost immediate, with churchmen from Catholic and Protestant traditions condemning Williams as being thoughtless and unhelpful during one of the darkest periods for Irish Catholicism. Caught aback by the level of outrage, Williams rang Martin, who later told churchgoers he appreciated the archbishop's "sadness" regarding "some unfortunate words".

Williams also upset members of the Church of England by playing down the significance of a papal initiative to tempt Anglicans to convert to Roman Catholicism. He made no mention of his Catholic gaffe during his Easter sermon at Canterbury Cathedral.

The Pope has still to make any direct comment on the of scandals in continental Europe. Last month he issued a letter to Irish Catholics, who are reeling from years of revelations over child sex abuse and cover-ups. Papal aides said the letter, in which Benedict said he was "truly sorry" for the suffering of victims, should be read as applying to other countries.

The latest is Malta, which the pope is to visit this month. It was reported last week that 45 priests stood accused of sexual offences since the creation of a church response team in 1999.

None of the cases has been referred to the police and the retired judge who heads the project said that was the responsibility of victims and parents.