More child deaths and irregular burials by the Catholic Church


We now know pretty well what happened to single mothers in Ireland, up to the 1990s. They were incarcerated in Church-run state-funded, institutions. In these institutions, called mother and baby homes or Magdalene asylums, the women were obliged to carry out hard manual work,  to atone for their sins (and provide profits to the institution). Their children were punished too for the sins of their parents. Usually they were stolen from their mothers. Some of the children were secretly sent abroad to be brought up by good Catholic families. Some became sex toys, Some were beaten to death, starved to death, or murdered in other ways. Mortality rates were over four times higher than in the rest of the population.

Now we know a little bit more. In one home at least, children's bodies - almost 800 - were denied a proper burial but instead dumped in a sewage tank. As you might have guessed, the Catholic Church has declined to apologise, or to carry out or assist in any investigation.

Forget prayers. Only full disclosure by Ireland's Catholic church can begin to atone for the children who died in its care 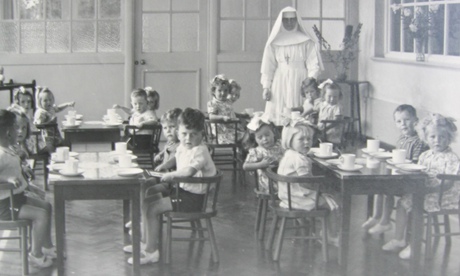 Sean Ross Abbey, a home run by nuns in County Tipperary, from where 438 babies were secretly exported to the US for adoption. Photograph: Brian Lockier/www.adoptionrightsalliance.com

The bodies of 796 children, between the ages of two days and nine years old, have been found in a disused sewage tank in Tuam, County Galway. They died between 1925 and 1961 in a mother and baby home under the care of the Bon Secours nuns.
Locals have known about the grave since 1975, when two little boys, playing, broke apart the concrete slab covering it and discovered a tomb filled with small skeletons. A parish priest said prayers at the site, and it was sealed once more, the number of bodies below unknown, their names forgotten.
The Tuam historian Catherine Corless discovered the extent of the mass grave when she requested records of children's deaths in the home. The registrar in Galway gave her almost 800. Shocked, she checked 100 of these against graveyard burials, and found only one little boy who had been returned to a family plot. The vast majority of the children's remains, it seemed, were in the septic tank. Corless and a committee have been working tirelessly to raise money for a memorial that includes a plaque bearing each child's name.
For those of you unfamiliar with how, until the 1990s, Ireland dealt with unmarried mothers and their children, here it is: the women were incarcerated in state-funded, church-run institutions called mother and baby homes or Magdalene asylums, where they worked to atone for their sins. Their children were taken from them.
According to Corless, death rates for children in the Tuam mother and baby home, and in similar institutions, were four to five times that of the general population. A health board report from 1944 on the Tuam home describes emaciated, potbellied children, mentally unwell mothers and appalling overcrowding. But, as Corless points out, this was no different to other homes in Ireland. They all had the same mentality: that these women and children should be punished.
Ireland knows all this. We know about the abuse women and children suffered at the hands of the clergy, abuse funded by a theocratic Irish state. What we didn't know is that they threw dead children into unmarked mass graves. But we're inured to these revelations by now.
Corless expresses surprise that the media were so slow to report her story, that people didn't seem to care. If two children were found in an unmarked grave, she observes, it would be news; what about 800? But what is the difference between the wall of lies, denial and secrecy the church constructed to protect its paedophile priests and a concrete slab over the bodies of 796 children neglected to death by nuns? Good people unearth these evil truths, but the church always survives.
The archbishop of Tuam and the head of the Irish Bon Secours sisters will soon meet to discuss the memorial and service planned at the site. The Bon Secours sisters have donated what the Irish TV station RTÉ describes as "a small sum" to the children's graveyard committee.
Father Fintan Monaghan, secretary of the Tuam archediocese, says: "I suppose we can't really judge the past from our point of view, from our lens. All we can do is mark it appropriately and make sure there is a suitable place here where people can come and remember the babies that died."
Let's not judge the past on our morals, then, but on the morals of the time. Was it OK, in mid-20th century Ireland, to throw the bodies of dead children into sewage tanks? Monaghan is really saying: "don't judge the past at all". But we must judge the past, because that is how we learn from it.
Monaghan is correct that we need to mark history appropriately. That's why I am offering the following suggestions as to what the church should do to in response:
Do not say Catholic prayers over these dead children. Don't insult those who were in life despised and abused by you. Instead, tell us where the rest of the bodies are. There were homes throughout Ireland, outrageous child mortality rates in each. Were the Tuam Bon Secours sisters an anomalous, rebellious sect? Or were church practices much the same the country over? If so, how many died in each of these homes? What are their names? Where are their graves? We don't need more platitudinous damage control, but the truth about our history.