Policy to tell police about priest suspects was vetoed, as lawyers say proof at last of cover-up by papacy 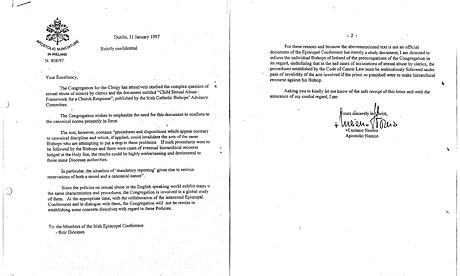 A copy of the 1997 letter from the Vatican, obtained by Irish broadcasters RTE and provided to AP, warning Ireland's Catholic bishops not to report all suspected child-abuse cases to police.

A letter to Ireland's Roman Catholic bishops has been revealed by the broadcaster RTE that contradicts the Vatican's frequent claim it has never instructed clergy to withhold evidence or suspicion of child abuse from police.

The 1997 letter documents rejection of a 1996 Irish church initiative to help police identify paedophile priests. Signed by the late Archbishop Luciano Storero, Pope John Paul II's envoy to Ireland, it instructs bishops that their new policy of making the reporting of suspected crimes mandatory "gives rise to serious reservations of both a moral and canonical nature".

Storero wrote that canon law, whereby allegations and punishments are handled within the church, "must be meticulously followed"; any bishop who tried to go outside canon law would face the "highly embarrassing" position of being overturned on appeal in Rome.

A 2009 Irish state report found this actually happened with Tony Walsh, one of Dublin's most notorious paedophiles, who exploited his role as an Elvis impersonator in a popular "All Priests Show" to get closer to children. In 1993, Walsh was defrocked by a secret church court, but successfully appealed to a Vatican court, and was reinstated in the priesthood in 1994. He raped a boy in a pub restroom that year. Walsh since has received a series of prison sentences, with a 12-year term imposed last month. Investigators estimate he raped or molested more than 100 children.

Catholic officials in Ireland and the Vatican declined requests from the Associated Press to comment on the letter, marked "strictly confidential"; RTE said it had been given it by an Irish bishop.

"The letter is of huge international significance," said Colm O'Gorman, director of the Irish section of Amnesty International. "It shows that the Vatican's intention is to prevent reporting of abuse to criminal authorities. And if that instruction applied here [in Ireland], it applied everywhere."

Joelle Casteix, a director of the US advocacy group Survivors Network of Those Abused by Priests, described it as "the smoking gun we've been looking for." It was certain to be cited by lawyers acting for victims seeking to pin responsibility directly on Rome, not the dioceses.

To this day, the Vatican has not endorsed any of the Irish church's three documents since 1996 on safeguarding children. Irish taxpayers, rather than the church, have paid most of the €1.5bn to more than 14,000 abuse claimants dating back to the 1940s.

In a 2010 letter to Ireland condemning paedophiles in the ranks, Pope Benedict XVI faulted bishops for not following canon law and offered no explicit endorsement of child-protection efforts by the Irish church or state. He was widely criticised in Ireland.

O'Gorman (who was raped repeatedly by a priest in the 1980s when an altar boy) said evidence is mounting that some Irish bishops continued to follow the 1997 Vatican instructions. A state investigation of Cloyne diocese is to come out soon, citing crimes concealed as recently as 2008.