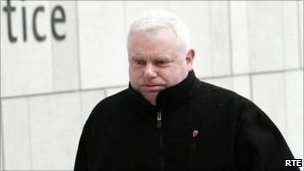 The Vatican wanted an Irish priest to serve 10 years in a monastery for abusing children rather than force him out of the Catholic Church, a report has revealed.

A previously censored chapter of the Murphy Report describes Tony Walsh as the "most notorious" paedophile to come to its attention.

Walsh was jailed for 12 years earlier this month for abusing three boys.

But the report said he was likely to have assaulted hundreds of children.

The Murphy Report by the Commission of Inquiry was published in November 2009.

However, chapter 19 was held back because Walsh was before the courts.

On 6 December the former cleric was sentenced to 16 years for sexually abusing three young boys in the 1970s and 1980s. The final four years of the sentence were suspended.

The previously unseen chapter criticises the Catholic Church and the police for the way they handled the case.

It details more than 15 years of abuse and concludes Walsh was moved from Dublin parishes in Ballyfermot to Westland Row to avoid further scandal.

It outlines how the former priest abused children in the 1970s, 1980s and 1990s even though priests, canons, monsignors, bishops and the Archbishop in Dublin knew about it.

An attack on a young boy in the toilet of a pub in Dublin in May 1994 eventually led to his dismissal.

Walsh assaulted the child after attending the funeral of his grandfather, as the Catholic hierarchy in Rome debated how he should be dealt with.

An investigation into his behaviour began in the early 90s by Dublin-based priests but the report said Walsh fought the Church penal process at every stage.

The process to dismiss him as a cleric began in January 1992, almost a year after the decision to do so was made.

Walsh appealed and Rome allowed him to remain as a priest until Archbishop Desmond Connell wrote to the Vatican and begged the Pope to dismiss him.

He was eventually defrocked in 1996 - 16 years after the first complaint.

He was given €10,500 severance pay but continued to represent himself as a priest.

The Commission stated: "This option of dismissing a priest directly by the Pope is reserved for grave and clear cases and is regarded as an extraordinary remedy, even when the normal penal process is inadequate."

Forty people complained of being abused by Walsh and he admitted to "using children for sexual gratification" once a fortnight over an eight-year period.

The report stated that Archbishop Dermot Ryan, head of the Archdiocese from 1972-1984, failed to properly investigate complaints against several priests including Walsh.

The report also criticises the "unacceptable" behaviour of two police officers involved in the case.

It says they had concerns about Walsh in 1990 and 1992 but failed to pursue a thorough criminal investigation.